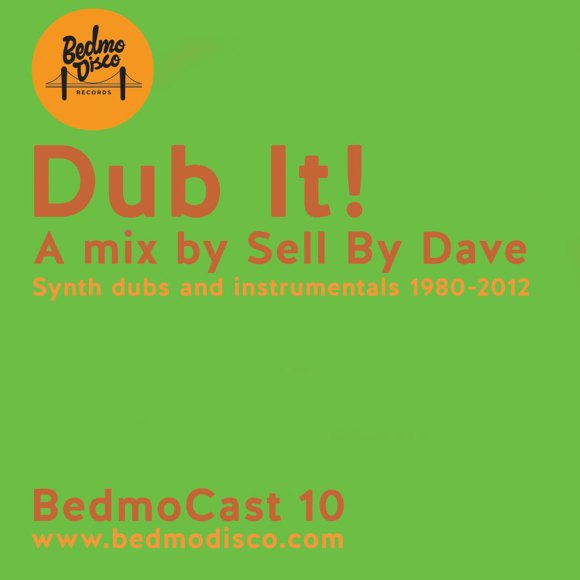 For the latest instalment of our ongoing BedmoCast mix series, we’ve got something a little different from our very own Sell By Dave – a percussive, tape delay-heavy journey through synth dubs featuring a mixture of boogie, proto-house, proto-garage, freestyle and Italo treats.

Below, he’s been kind enough to go through the mix track by track, highlighting a few lesser-known gems and generally getting enthusiastic.

You can listen to the mix here:  BedmoCast 10_ DUB IT!

I’ve always had a soft spot for the dub versions of both popular and lesser-known records from the 1980s. When digging through records in second-hand shops, I’ll instinctively reach for those that feature a Dub or instrumental rather than a B-side. Of course, more often than not these dubs will be terrible, featuring some rather dubious ‘80s production techniques and fads – chopped-up vocal stabs played on a Fairlight, a bit too much cheesy vocal, percussion that sounds cheap – but occasionally they still sound fantastically fresh.

The 1980s was a great time for dance music. The development of affordable drum machines, digital samplers and powerful synthesizers gave producers and musicians the means to try brand new things. This of course led to many musical developments – house, techno, garage, electro, freestyle, Jam & Lewis style “contemporary R&B” – that either still dominate dancefloors, or influence producers. There was also a “golden period” in New York during the early-to-mid 1980s, where disco became boogie, and later spawned ‘garage house’. Even the city’s post-punk and punk-funk musicians got in on the act (check the work of Bob Blank for proof). In between, producers such as Paul Simpson and Winston Jones bridged the gap with records that would later be considered “proto house” and “proto garage” classics.

In New York in particular, there were a number of editors and remixers who understood the power of the dub, and often went to great lengths to produce drum-machine heavy versions, laden with delay, that would work in the city’s leading clubs. Shep Pettibone, Francois Kevorkian, John “Jellybean” Benitez and Larry Levan – certainly during his golden period around 1982 and ’83, before his well documented substance abuse problems finally got the better of him – in particular were at the top of their game, turning freestyle, boogie, electro and proto-garage jams into sparse, sweaty dancefloor gold.

Of course, it wasn’t just New York leading the way. There are good European examples too, in particular in the Italo scene. I’ve not touched on that much in this mix, but may explore it at a later date. I’ve also included a few contemporary examples of records inspired by that early to mid ‘80s sound. As ever, it was mixed in one take, with just a collection of tunes and only one clear objective: to try and accurately capture the sweaty, basement-centric feel of the clubs these records were initially designed for. Hopefully I’ve done it justice.

This is almost the ultimate early ‘80s boogie dub. Mixed by Shep Pettibone, it begins with a reverb-laden vocal and then bobs and weaves, dub style, for an epic 14 minutes. I’ve only used a relatively small snatch, but hopefully there’s enough to get a flavour of the vibe.

Vanguard was a constant source of interesting material in the early 1980s, releasing tracks that largely sat somewhere between boogie and freestyle. The vocal version of this tough, synth-heavy groover is nice, but typically I prefer the dub. Unusually, there was no big name mix, with producer Lance Smith taking mixing duties.

The original version of this mid-‘80s Bowie number was featured on the Jim Henson-produced film Labrynth. It’s hardly one of his best, a fairly shoddy synth-pop number. The Extended Dance Mix is rubbish, too. The dub, though, is ace – basically six minutes of heavy drums, tape edits and sound effects. For the record, it was mixed by Steve Thompson and Michael Barbiero, who seemed to be the go-to men for EMI America when pop records needed remixing; they also provided ‘dance mixes’ for Tears for Fears and Simply Red, amongst others.

Eric Duncan and Chicken Lips’ Dean Meredith have long been disciples of both obscure old drum machines, and the potential of 1980s, New York style dubs. Their two recent EPs for NYC’s own Golf Channel featured a couple of alternate dub versions that swing to the dirty groove of tape edits and early drum machines. This version of the unusual “La Chiave” is probably my favourite, though the 808 Tape Edit of “Glow” is also excellent.

This debut single from Orlando Johnson’s boogie crew is near perfect. The vocal version is ace and the ‘Instrumental’ – mixed by Jellybean and featuring enough delay-laden vocal snatches to qualify as a proper dub – almost better. It’s one of my favourite instrumentals from the period. I’m not alone, either – Awon and Five-Stylez also own copies. You could say it was a true “Bedmo Disco” fave, then.

Around ’82-’83, Larry Levan was on fire, laying down a string of brilliant remixes – Gwen Guthrie’s “Hopscotch” and “Padlock”, Frontline Orchestra’s “Don’t Turn Your Back On Me”, Imagination’s “Changes” etc – and this tweak of Jeffrey Osborne for A&M is one of his best dubs. It features all his stapes – the delay-laden drums, the obligatory bassline drop, drum breaks aplenty – and is utterly ace.

This was actually a big club hit on both sides of the Atlantic when it came out in 1985, but it arguably hasn’t stood the test of time. The same could be said for many Bobby ‘O’ records, in truth, but it’s still a great example of his work. Influenced by both Italo and Hi-NRG, Shep Pettibone’s Dub is formidably percussive and includes some typical vocal cut-ups.

Melbourne-based producer Benny Badge has been producing some great, synth-heavy ‘80s boogie revivalism for a few years now. This Dub – tucked away on the B-side of the excellent “Flip The Coin” single on Voyeurhythm – is brilliantly observed, sounding authentically 1980s in its sound and execution.

A few years back I spent a lot of time editing up ‘80s releases in the original tape edit style for a project codenamed ‘The Bedmo Disco Dubs’. A couple of the tracks eventually saw the light of day on our digital-only EP, “It’s A Synth”. There were loads more, though, that never made the cut and didn’t even appear on Soundcloud. This extended, drum-heavy, dub style edit of Alisha’s curious 1985 freestyle cut “Baby Talk” is one of those. From memory, the edit features bits from all three mixes on the 12” – all of which were done by Shep Pettibone.

From the camper end of the spectrum, Koto’s “Japanese Wargame” is fairly well known as Italo tunes go, and for good reason. Its bassline, in particular, is ludicrously heavy. The Dub wanders around a fair bit, beginning – bizarrely – with the sound of somebody tuning a radio. For this mix, I was determined to feature the amazing bass drop, as well as some of the excellent percussive cut-ups that litter the mix.

I could have included the fantastic dub of “Music Is The Answer” on here, but I’m a bit of a fan of the sparseness of Timmy Regisford’s Dub of “Trapped”. Bizarrely, on the original UK 12” Regisford’s Dub is edited down to less than 4 minutes, with the full seven-minute version being included on a separate 12”. For the record, I used the shorter dub here.

No exploration of the 1980s synth dub sound would be complete without something from Paul Simpson, the undisputed master of proto-garage dubs. What’s included here is actually the second half of the vocal version, which taken in isolation sounds like a genuine Dub. While not Simpson’s best, it’s still utterly fantastic.

I could have used any number of Awon tracks in this mix, but opted for an unreleased, electro-influenced gem we’ve been keeping on the back burner. Hopefully it will see the light of day at some point, ‘cos it’s a bit of a belter – tough drum machine beats, thick synth bassline and some great use of delay-laden vocal samples. He’s got some talent, our Gareth.

This is one of those records that you don’t see in second hand shops very often. It’s not worth a great deal, and the full vocal version is dreadfiul. That said, it’s worth picking up for the 10-minute dub, which is brilliantly sparse. Really, it’s little more than beats, effects, bassline and snatches of Payne and Ingram junior’s vocals.

I have a soft spot for Major Harris, and have rather too many of his early ‘80s records (and not just the superb “Gotta Make Up Your Mind”). The dub of “All My Life”, mixed by Nick Martinelli and David Todd, is suitably odd, stripping back the original and making great use of odd editing techniques (reversing certain sections of the vocal etc). Crucially, the beats are properly tough.

New York four-piece Citispeak only made two records, both in 1983. Both could definitely be described as curiosities. The vocal version of “I Don’t Need Your Handouts” is a bit of a mess, but the more out-there dub is excellent – in parts, at least, For the record, it was recorded at Bob Blank’s Blank Tape Studio, though he appears not to have produced or mixed it.

There’s not much more to say about Konk’s best-known tune, a perfect example of the crossover between arty experimentation and dance music in New York during the early 1980s. The lesser-played dub features some almighty Latin percussion, and it’s that – alongside the dirty synths – that make it an unbelievably hefty dancefloor jam.

Another Winston Jones/Paul Simpson dub, taken from a lesser-known – but superb – Partytime release. I’ve written more about this for Juno Plus, if you fancy a gander. Click here to read it.

I’ve never been a massive fan of Gary’s Gang, and the full vocal version of this is a bit dubious. The 10-minute dub, though, is majestic – arguably one of the best of the period. Impressively, it was written, produced and mixed by Gary’s Gang lead vocalist Joe Tucci. It was definitely ahead of its time.

I just had to include this, as it’s arguably my favourite West End record of the period. The vocal version is peerless, but this alternate take – an instrumental with a few dub touches – is almost as good. When the bassline drops, it always gets me going.

The whole Will Powers project was a big joke by photographer Lynn Goldsmith, who wanted to poke fun at self-help entrepreneurs. Strangely, there was some excellent musicians and producers involved – most notably Robert Palmer, Sting and Sly and Robbie. “Smile” was mixed by Lindstrom fave Todd Rundgren. His dub features good use of the original’s gospel vocals and copious amounts of delay. It seemed an upbeat enough place to finish.