SELL BY DAVE’S RANT: SMALL PARTIES ARE WHERE IT’S AT 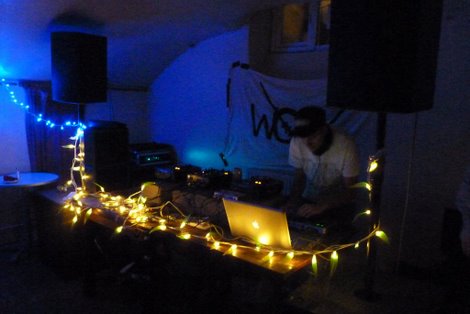 As a self-proclaimed “disco Grinch”, it would be fair to say that I like a good moan. I also mutter to myself on a weekly basis when I’m sent a new batch of releases to review and realize that every single deep house, tech-house or nu-disco record sounds the same. In private, I spend far too much time whining about things that bug me about certain strands of electronic music and club culture. On the whole, though, I like to remain positive; after all, there is still much thrilling new music to discover, events to attend and inspiring musicians or producers to talk to (for the uninitiated, I’m a music journalist by trade).

I will, however, never lose my disdain for those who either base their musical opinions on fashion trends or, worse, use a platform in the national media to put forward fatuous arguments about the current state of electronic music.

I was driven to jump onto my laptop earlier today by an article on The Guardian website by a journalist called Joanna Fuertes-Knight. In it, she argues that small club nights have had their day, and that smaller parties are no longer where it’s at. I’m paraphrasing, but the gist of her argument seems to be that in the age of the Internet – and, in particular, Boiler Room – we don’t need to go to small nights to hear new music, hence the re-emergence of “megaraves” in 1,500+ capacity venues. She believes that we appreciate the shared experience more at such big events. As an aside, she also mentions that famous  “small” London parties such as YoYo and FFWD>>, which helped foster new styles of bass-heavy music, were great because it was nearly impossible to get in unless you were a regular or “on the inside”. There are many reasons to celebrate parties at small venues, but the fact that you’re “in” and others aren’t smacks of smug elitism. It was probably this part that riled me most.

That said, what really drove me to start penning this diatribe was the idea that small nights are no longer relevant and that clubbers/music heads do not need to attend them to hear “new music”. Strictly speaking, the latter is correct; you could, if you so wished, spend most of your days trawling through endless blogs, Soundcloud pages and so on to hear new music. Some people do just that. Most don’t have the time, though, and prefer to attend events where they can hear “new music” – ideally mixed in with some older records to put them in context – in the right environment.

Personally, I have always preferred smaller parties and events to gigantic raves. Sure, I’ve had some good nights losing myself (and my friends) in dance tents at music festivals, or in dingy warehouses. But given the choice, I would still much prefer to be in a sweaty little basement, back room, bar or art space, immersing myself in the music in the company of people drawn to the event either through a shared passion for a particular artist, or simply because it is where their mates and similarly-minded people are hanging out.

Take Bristol as an example. The city suffers a little, in my opinion, from a lack of decent club spaces that suit the needs of those wishing to put on small to mid-size events. The club scene is also dominated by events at Motion, a former indoor skating and BMX park that can accommodate up to 2,500 people. For the uninitiated, it is akin to Bristol’s answer to the Warehouse Project. It is hear that you will find huge line-ups of A-list talent, and crowds to match – despite the usual £20-plus ticket price. Some of the line-ups are astonishing, and certainly the promoters have the financial clout to be able to bring ‘names’ to the city that others can’t afford. It has been a rip-roaring success and has, predictably, proved popular with the city’s students.

Yet the atmosphere at times can be a little, well, odd. While a percentage of the crowd is there to appreciate the music and dance to sounds played by their heroes, most are just there for a “big night out”. There is nothing wrong with this, but it does lead to cavernous rooms full of excitable people jostling for position, or wasting valuable dancefloor space gurning to their mates, leaving the most enthusiastic at the periphery. The main room at Motion is serviced by an enormous Funktion 1 rig, but it barely sounds good unless you are in the 20 feet of space, 30 metres back, that functions (no pun intended) as the “sweet spot”. It is clubbing for those who judge their night by the experience, rather than the music itself. Again, there’s nothing wrong with this per se, but it’s not where I’m coming from – or others like me.

Although Motion looms large over the Bristol scene, it has not killed it (as some promoters would argue in private). In fact, it has allowed those who cherish smaller parties and alternative events, those with more of a “special” feel, to thrive. Over the last 12 months, Stokes Croft, in particular, has become a hub for interesting events of every musical hue. Using unusual spaces such as Take 5 Café – a small, slightly odd curry café with a tiny basement space – and The Motorcycle Showrooms – a former motorcycle shop converted into a community art space, enthusiasts have been able to put on some thoroughly memorable events with guests deemed too small, insignificant or left-of-centre to appear on the Motion line-ups (or at other mid-sized local venues, for that matter).

Many of the promoters that use these venues do so because they prefer the intimacy, atmosphere and laidback vibe that generally comes with using them. They can book guests that excite them, whether international producers of note in more underground styles, or local DJs with deep record collections. They can put effort into décor, hire in small but wonderful-sounding soundsystems, and share their passion with less than 200 like-minded people.

A quick look at some of the regular parties, and their guests, should give you a clue as to what I’m on about. There’s the dubwise goodness of Peng Sound, the unfussy but cultured house of Housewerk, the out-there cosmic exotica and grimy release of Dirtytalk, the sound science of Tape Echo and the left-of-centre house, techno and disco of local record shop/label Idle Hands. I sadly can’t recall all the guests who have appeared in intimate spaces around Stokes Croft, but have personally attended nights featuring Young Marco, the 100% Silk crew, Mark Seven, West Norwood Cassette Library, Mudd, World Unknown (OK, I missed that one as I was at a christening, but I would have been there otherwise) and Leif. Soon, I’ll be attending a 100-capacity L.I.E.S label showcase at Take 5. I’ve also seen Ben UFO, one of the most inspiring DJs out there right now, in a pub.

Really, I’ve barely scratched the surface. There are many more attractions – a big shout-out to EFA and his regular events at the Bank of Stokes Croft – and a constant flow of new promoters putting on parties with fresh ideas, or different takes on familiar sounds. To me, this is the essence of club culture; not the idea that music is only of worth if it is new, left-of-centre and fashionable (God forbid), but rather intimate events, run by enthusiasts for the love, attended by people who genuinely want to hear great music, on a good soundsystem, in an intimate space. Ask yourself this: would you rather be in a 100-capacity cellar, surrounded by smiling faces, or in an enormous warehouse, trying not to loose your footing as another young, fresh-faced thing falls into you after a few too many sherberts?

Small nights and intimate parties have always been the lifeblood of the club scene. It is where new DJs and up-and-coming acts get their break, it is where local DJs perfect the art of working a dancefloor, and where local producers meet and exchange ideas. A lot has been written about the vibrancy of Bristol’s electronic music scene right now, and almost all of it is true. All those collaborations between Bristol producers and deals to release new tracks, have largely come about through the friendliness of the scene and open-minded attitude found at the city’s intimate parties. And, to a lesser extent, the hours spent in the back yard of The Bell on Jamaica Street, where producers, label bosses and DJs can often be found drinking real ale and sharing a spliff, enthusiastically discussing their next project or up-coming party.

When I got my first staff job on IDJ Magazine back in 2000, the club scene at large was thriving because of the much-derided “superclub” scene. By the time I left in 2008, it had long gone. Dance music didn’t die, though; in fact, in that time thrilling new sounds and scenes emerged, from tiny parties and small groups of people dotted around the World (whether in West London, East London, Cologne or Oslo). The current trend for massive “megaraves” is just a rehashing of the superclub thing, it’s just that this time round it seems a little less overblown. These, too, will die a death at some point as a new generation of students and young hedonistics are attracted to other pursuits. When that does happen, it will be the small parties that re-invigorate the scene, just like they’ve always done.

Sell By Dave is the DJ alter-ego of experienced music journalist Matt Anniss, former Editor of IDJ Magazine. He currently writes for Juno Plus and provides sleeve notes and press releases to a number of underground electronic music labels

One thought on “SELL BY DAVE’S RANT: SMALL PARTIES ARE WHERE IT’S AT”