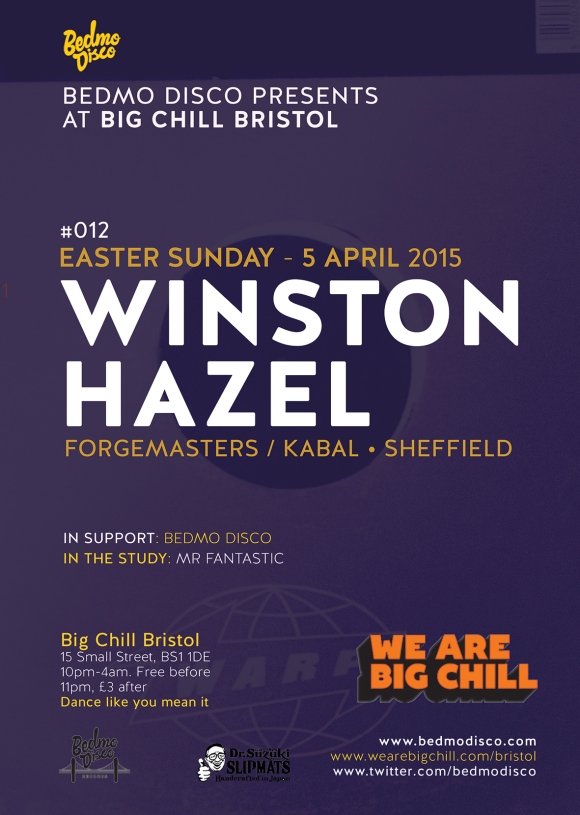 A year ago today, on Easter Sunday 2014, we kicked off the “Bedmo Disco Presents” series – a programme of events featuring hand-picked guest DJs from the UK, Europe, the US, Australia and, of course, Bristol. Our first guest was Lumberjacks in Hell boss Marcel Vogel, who got the party going in his inimitable way. That day set out the formula for what would come over the next 12 months: extra sound, extended sets from our headline guests, and the now familiar pre-gig meal in the local lebanese restaurant.

Since then, we’ve had some top DJs swing by to play, including Inkswel, Auntie Flo, Alexander Nut, Justin Van Der Volgen, and Bonar Bradberry. Tonight, we toast that first year – and look ahead – in the company of a man who has flown under the radar a little for most in Bristol: Sheffield legend Winston Hazel.

WInston is most famous, of course, for being part of Forgemasters, whose seminal “Track With No Name” – a bleep classic built around loops from Manu Dibango’s “Abele Dance” – was the first record to be released on Warp way back in 1989. By the time that record came out, Winston was already one of the North of England’s most celebrated DJs, having built his reputation via various weekly and monthly residencies in the Steel City, most notably at the now legendary Jive Turkey parties (alongside his old pal Parrot, who retired from DJing many years ago). In recent years, Winston has been entertaining Sheffielders via the Kabal parties he runs alongside a collective that includes old pals Raif Collis, Pipes and, if he’s in town, Todda T (it was the Kabal crew who gave Tom Bell the ‘Toddla’ tag, due his tender years when he started playing for them).

If you’re still unsure as to Winston’s credentials, or want to know more, there’s an extensive interview (with accompanying mix) on the Test Pressing site. The words were penned by our own Sell By Dave.

As usual, we’ll be starting at 10pm, there will be extra sound, and it’s free to get in before 11pm, £3 after. Spread the word – Winston will do a terrific job, and this is a rare chance to see a true master at work in Bristol.