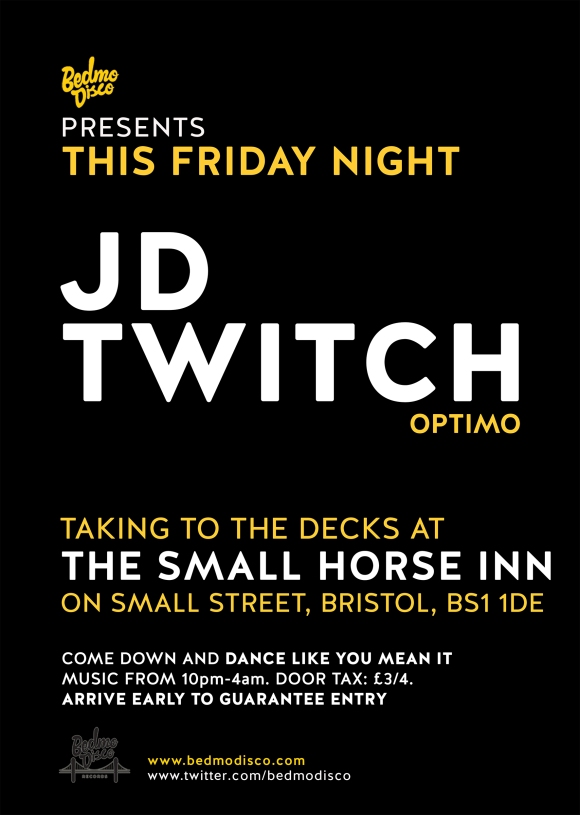 Here’s something you wouldn’t want to miss: a rare chance to see Optimo’s JD Twitch flying solo behind the decks in Bristol. As you can see from the handy graphic above, the party takes place this Friday (October 9th) at The Small Horse Inn on Small Street, the new late night drinking/dancing establishment from Team Love (the people behind The Love Inn, the Love Saves The Day festival, Love International in Croatia, and loads more besides).

When we originally put the event together, it was due to take place at The Doghouse, and some listings may still state this as the location. However, we lost confidence in the management of the Doghouse and decided to switch it to The Small Horse Inn, which opened last weekend. We’re familiar with the space already, as it was previously Native and Big Chill Bristol, where we hosted many other Bedmo Disco Presents parties. To become the Small Horse, the space has had a total makeover, with a freshly tuned and re-built sound system that was sounding particularly impressive on its’ opening weekend. Certainly, we’re excited about the possibilities of the space, and with its’ intimate layout, it should make for a great atmosphere on Friday night.

Twitch himself should need little introduction. Keith McIvor, as his close friends and family call him, began his DJ career in Edinburgh at the turn of the 1990s, where he was resident at now legendary house/techno night Pure. It’s for Optimo [Espacio] and spin-off labels Optimo Music/Optimo Trax that he’s best known. The Optimo parties at Glasgow’s Art School (and these days Sub Club, amongst other places) are the stuff of legend, and feature Keith and DJ partner Jonny Wilkes joining the dots between a multitude of sounds and styles whilst focusing on the dance floor. It’s for this reason that Optimo has attracted a cult following around the world, and why finding a spare date in their packed gig schedule is tricky, to say the least. It’s also why we were so keen to get Keith down to play for us; you know he’ll get it right, get the party going, and play music that makes you go “WHAT THE HELL IS THIS?!” whilst still dancing your ass off.

Upstairs in what the venue is calling “The Lodge”, you’ll find Legendary Tone and Spice Route delivering mellower flavours, whilst keeping an eye on the dance floor. Both have amazing record collections, and will play some killer material.

There are no advanced tickets for this, and it will be first come, first served on the door. Entrance is £3/4, though the venue is open from late afternoon, so those who are really keen could turn up before we start at 10pm for a few free-drinks and avoid the charge. Either way, we’d advise being down before midnight (and ideally 11.30pm) to guarantee entry. It will be worth the effort, though – Keith will absolutely smash it, we’re sure.

Should you want something to get you in the mood for Friday night’s revelry, Sell By Dave has put together an all-vinyl mix of dance floor treats for the Wax Exchange crew. You can stream it via the Soundcloud player below. 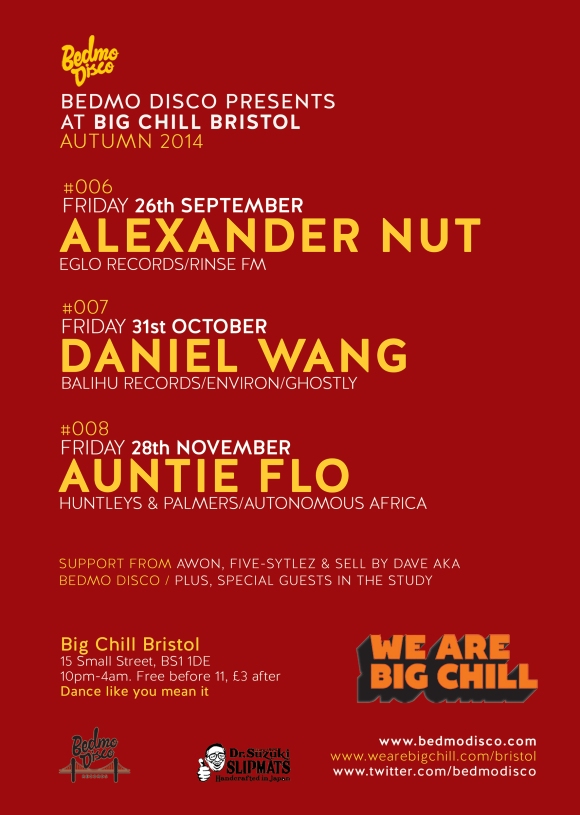 Ever since we launched our Bedmo Disco Presents… series back in April. we’ve been working hard to put together a strong line-up of guest DJs for our autumn schedule. We’re excited to finally be able to announce the guests for our next three parties. We’re biased, of course, but we think it’s a killer line-up.

First up, on September 29th, we’ll be welcoming Eglo Records boss, Rinse FM DJ and killer party-starter ALEXANDER NUT to Big Chill Bristol. We’ve been enormous fans of Alex’s mixed-up, anything-goes-as-long-as-it’s-soulful approach to DJing since we first heard him play at UFO in Bristol a few years back. We’ve been lucky to dance hard to his sets on numerous occasions since, and he always kills it. For his appearance at Bedmo Disco Presents, Alex will be playing for three hours, joining the dots between boogie, soul, disco, broken beat, modern soul, house, funk, hip-hop, techno futurism and everything in between. It will be deliciously soulful and dancefloor-friendly. Knowing Alex, he’ll also get on the mic, probably after sinking copious amounts of rum. It will undoubtedly be special. While Alex is rocking it downstairs, our old friend OWAIN K from Cardiff will be joining the dots between styles up in the study. He’s an excellent DJ and a talented producer, too, as anyone who has checked his releases on Dessous Recordings will tell you.

Then, on the final Friday in October, we have a very special treat for anyone who loves disco: a return to Bristol for the effervescent DANIEL WANG. Now based in Berlin after years spent earning his stripes in New York, Danny is without doubt one of the finest disco DJs around. His record collection is absurdly deep, and he always gets a party going. He’s only played in Bristol twice before – at UFO first, then at the Motorcycle Showrooms in 2013 – but both times he absolutely killed it. We’re delighted to have him on board, and look forward to hosting him. He’s something of a legend, all told, having spearheaded the first wave of “nu-disco” in the late ’90s and early 2000s – first with his own label, Balihu, and later on Morgan Geist’s Environ imprint. He’s also released material on Ghostly International, while his latest re-edit 12″ under the Otto Gelb alias (simply titled Volume 3) is – predictably – another killer. We’ll write more about Danny and his long career closer to the time.

Finally, in November, we have Huntley’s & Palmers resident AUNTIE FLO. Those with an interest in the modern wave of African-influenced music – and Afro funk and afro0-disco full stop – will know all about the London-based Glaswegian. He’s released a mixture of killer edits (a number on the excellent Highlife Edits series) and original material for the likes of Permanent Vacation, Autonomous Africa and Kompakt Extra. His original music is particularly exciting, as it blends African rhythms with contemporary electronic styles and all manner of global influences. He’s not played in Bristol before as far as we can make out, so it will be thrilling to give him his debut in our fair city.

For all of these parties, we’ll be addressing the sound issues that some have complained about. We’re going to be tweaking the system and repositioning the speakers, with additional stacks, to get a warm, rich sound befitting the quality of the music. We’re heads, and sound is of massive importance. The venue has given us their blessing to do this, and we’re working with sound engineers to get it right. It should enhance what will be great parties.

Don’t forget we’ll also have a 4am licence for these, special guests in the study, and ourselves warming you up and sending you home happy at the end. Oh, and it’s always going to be £3 in, so you can come and “dance like you mean it” without spending a fortune.

We’ll be talking more about our guests and these forthcoming parties on September’s Bedmo Disco Radio, which takes place tomorrow (Tuesday 2nd September) on www.infader.fm, starting at 8pm. 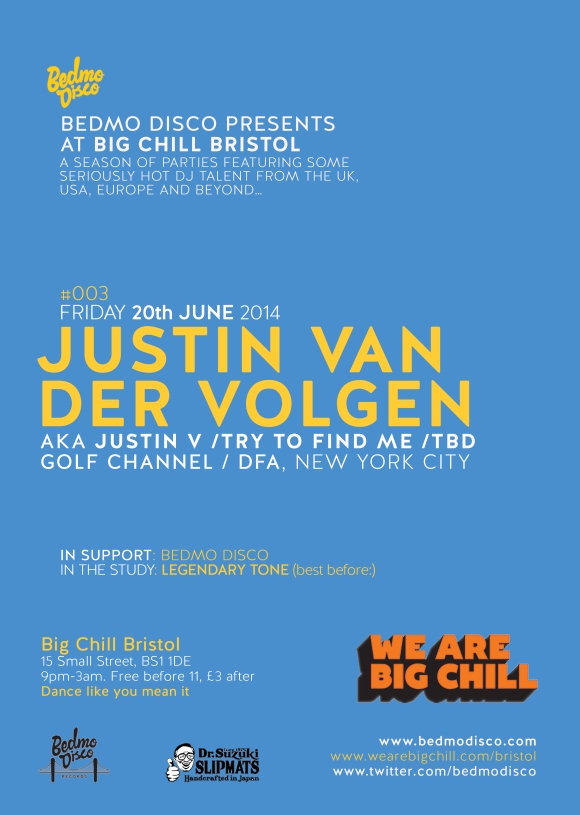 This Friday (20th June), the Bedmo Disco Presents… series at Big Chill Bristol reaches its’ third installment. Having given Amsterdam’s Marcel Vogel his Bristol debut and allowed PBR Streetgang’s Bonar Bradberry to indulge his disco side, this time we’ve looked to New York for inspiration. When we found out that Justin Van Der Volgen was planning a jaunt to Europe this June, we jumped at the opportunity to book the Brooklyn-based DJ/producer.

Justin doesn’t hail from NYC, but he’s become a part of the fabric of the city since his days with Warp-signed punk-funk outfit !!!. Over the last few years he’s built up a reputation as a fearless producer and re-editor, both on his own and alongside friends from the vibrant Brooklyn/Williamsburgh scene. To get you in the mood for his extended set at Big Chill Bristol on Friday, we’ve decided to run down some of his “greatest hits” to date, both on his own and with a variety of collaborators.

Scroll down for our picks of his productions, and don’t forget that Justin headlines Bedmo Disco Presesnts… #003 at Big Chill Bristol this Friday. We’ll be opening until 4am for the first time, with Justin on around 1am. It’s free to get in before 11pm, £3 after. Our old pal Legendary Tone (best before:/Hotel/Wild Honey Sound System) will be mixing it up in the Study, too, if you fancy a break from Justin’s full-throttle NYC madness.

Arguably Justin’s first solo “hit”, this Golf Channel released jam is a humungous chunk of surging electronic disco propelled forwards by incessant handclaps, looped guitars and a booming bassline. It’s the sort of record that it’s impossible not to dance to like an utter lunatic. We secretly hope that he drops this on Friday, Just so that we can see the reaction.

Justin’s edits are becoming the stuff of legend. He’s done plenty – both on his own and with others – but this version of Bobby Thurston’s “You Got What It Takes” is arguably his best known. It’s a near perfect example of the art of the re-edit. Thurston’s original is a bit of a banger, but does feature a quite rubbish middle eight and some rather shoddy vocals in parts. Justin stripped those out, emphasizing the amazing groove, righteous horns and select vocal passages. Near perfect in almost every way, and a big tune at Bedmo Disco parties since its’ first release in 2012.

It says something about a track when everyone remembers the remix, rather than the original. That’s certainly the case with Soft Rocks’ “Talking Jungle”. While the original – a steel drums laden chunk of hazy Balearica full of live drums, groovy organs and sun-kissed guitars – is a fine piece of music, it pales in comparison with Justin’s remix. If you’ve not heard it before, take a listen on the link above – it’s a ten-minute chunk of baggy disco bliss complete with brilliant piano solos and a killer bassline. A superb remix – one of the best of recent years, in our book.

Back in the late 2000s, Justin took on the Try To Find Me alias as a pseudonym for his re-edit work. He put together a couple of mixes of his own edits, the second of which came out on Phil South’s Golf Channel Recordings label in 2009. A year later, one of the highlights of that second disc – “Get To My Baby” – sneaked on on a single-sided black label 12”. This time round, it had been teased and tweaked into driving, delay-laden disco perfection by Justin and fellow Brooklyn resident Doug Lee (AKA Rong Music regular Lee Douglas) under the TBD moniker. This has been a staple in Bedmo Disco sets since the time, and has lost none of its’ allure.

Around the same time that they were re-edited an edit, Justin and Doug Lee sat down and wrote “Oh Yes”, which was the highlight of a thrillingly robust 2010 EP for DFA Records. A rip-snorting acid-meets-Italo disco thumper, it sounds every bit as raw and intense now as it did when it dropped. If you were in any doubt that Justin can bang it hard, look no further.

This early foray into the world of TBD was a little overlooked at the time of release, but still sounds thrilling five years on. Baggier than their DFA release, it married Justin’s punk-funk sensibility and love of cowbells with Doug Lee’s love of wonky electronics and no-holds-barred disco. Certified banger!

A vintage remix from Justin’s days as part of !!!. Featuring Doug Lee hammering away at the organ, it’s a prime slice of hazy, vaguely Balearic disco-rock with a psychedelic twinge. Let’s all go to the moon!