Exciting news for all those DJs who use Serato, Traktor or CDs… lots of Bedmo Disco Records treats have now dropped on digital download.

This week has seen the release of the first EP in our new download-only series, BEDMO DIGITAL VOL 1. This features hot scalpel edits from FLX ONE and BEDMO DISCO. You can get Bedmo Digital 01 at Junodownload.com.

Also available (as of today, fact fans) is AWON and BEDMO DISCO’s B-FUNK, which gained much praise when we dropped it on blue vinyl earlier in the year. That, too, is now available to buy at Junodownload.com.

As ever, we appreciate your support. If you like our releases, let the world know – either via social media, blogs or just by playing them loud in sweaty basements to groups of gurning disco freaks.

Good news for DJs of a CD/Serato/Traktor persuasion – there’s a whole raft of Bedmo Disco releases dropping digitally over the next few weeks. This includes the launch of a whole new series of download-only singles. We’ll get on to that in a moment.

The first digital release to drop is Jimmy The Twin’s excellent drum machine edits EP, “505 Funk (With an 808 Boom)“. It’s out now and you can get it exclusively from Juno Download by clicking here>>  If you’re unfamiliar with the tracks themselves, take a look at our release page for 505 Funk here >>

Following that, you can expect to see the much-lauded “B-FUNK” by Awon and Bedmo Disco (BEDM006), probably sometime in the next few weeks. Keep your eyes peeled. For the record, you can keep track on our new digital releases by bookmarking the Bedmo Disco Records page on Juno Download. Remember, it’s still available on blue vinyl if you prefer wax.

As we mentioned earlier, there’s also the launch of a brand new series of download-only releases, Bedmo Digital, to look forward to. The series will basically showcase goodness from the extended family that we’re not putting out on vinyl. Think of it as a bit of gift to those who still support music, but prefer not to buy vinyl.

The first Bedmo Digital release features scalpel edits from FLX ONE and BEDMO DISCO. Previews of all three of the tracks from “Bedmo Digital 01″ are now up on our Soundcloud profile. You can listen to them below…

Birthday bumps: Bedmo Disco Records gets busy at the Big Chill this Saturday 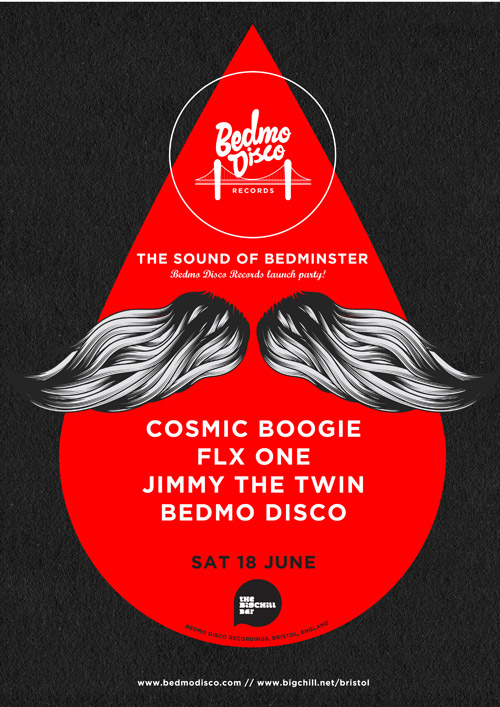 This coming Saturday (June 18), we’re heading to The Big Chill Bristol to host a bit of a shindig in honour of Bedmo Disco Records’ impending move to vinyl. Think of it as a bit of a launch party, with a collection of our artists – Cosmic Boogie, FLX One and Jimmy The Twin – joining us behind the decks. Hopefully it will be a special night.

There are a number of reasons why this weekend’s party probably means more to us than our usual fun gatherings down at the Big Chill, which are never less than excellent (thanks, mostly, to the up-for-it and mixed crowd that heads to the venue). For starters, this weekend marks all manner of anniversaries.

Firstly, it’s four years to the day (well, almost) since the first Bedmo Disco-related 12” single came out – our Pointless Edits debut, “Bedmo Disco Volume One” by Thumbs Aloft. It’s also three years since the second 12”, “No Sleep Till Bedmo”, which followed almost exactly a year after POINTLESS01.

But the biggest anniversary/birthday belongs to Bedmo Disco Records. This time last year, we launched the label as a digital-only outlet with an excellent EP of scalpel jobs by our old pal Cosmic Boogie, “The Disco Grinch EP”. While we tried our best to spread the word, you couldn’t quite classify our efforts as a fanfare of publicity – more a lone trumpet solo.

We’re not going to make the same mistake again now we’re moving to vinyl. This time, we’ve got a whole horn section on it, with a string quartet, harpist and conductor in reserve just in case that isn’t loud enough. Saturday’s party is just part of this – a second coronet player, if you will.

In all seriousness, in the last year we’ve learned a lot about how to run a label (and, in some cases, how not to) and have been working hard to put together a rock-solid release schedule for Bedmo Disco Records that guarantees a series of high quality 12” singles.

We’ve always been fairly choosy about what we release, especially when it comes to disco and electrofunk edits. There are billions of re-edit series around, and even more one-off 12s. Some of these are essential, but plenty are so-so or unnecessary. While taste is personal and we’d never claim to know more or less than anyone else about what should and shouldn’t be released, we’ve always been determined to solely release the cream of material we receive or make ourselves. Hopefully you’ll be able to hear that over the next six months.

Our first release this time round is, we think, a bit of a doozy. As regular visitors to this website or our Soundcloud page will already know, it’s by a talented chap called Rocco Raimundo. The blurb says he’s an Italian lothario. He’s actually a thoroughly decent bloke who lives in Australia, but don’t let that put you off; his re-edits – more of which will be released on his own Pollo Erotica imprint in the near future, and one of which has already landed on the Tribute label – are every bit as sleazy, sexy and downright sensual as his cheeky persona.

So far, DJ support has been strong and plenty of bloggers have been saying nice things about “Between The Sheets”. It is in no way revolutionary – these are disco re-edits, after all – but we reckon the three tracks are rock-solid, and they always do a great job for us when we drop them in our sets. As a first release on 12”, we reckon they should put Bedmo Disco Records back on the map… or at least in the “places of interest” section in disco’s sat nav.

We’ve got lots more lined up to follow Rocco’s 12”, too. First, there will be a split 12” called “The Sound Of Bedminster – Part 1”, featuring edits from Cosmic Boogie and Bedmo Disco. CB’s tracks – the brilliant “Calling Lenny” and “Catch 22” – first appeared digitally this time last year. Demand has been high for a vinyl release, so we’re putting them out alongside a couple of our own bits. One of these, “Love Jam”, has had quite a lot of heat already from its digital release. The second track we’ll tell you about soon – it’s going to be a surprise (probably to us as well, since we’ve got to choose between a ton of stuff).

Following that, we’ll be giving a Bedmo Disco Records’ debut to a Geordie-in-Kentucky, JP Source. His “Get Your Bearings” EP includes some real treats, including a ludicrously heavy, near-relentless Hamilton Bohannon re-rub that’s been doing the business for us for the last few months. The other tracks, “Get Your Bearings” and “Grounds For Temptation”, are almost as good, dancing on that fine line between down-the-line edit and house production. We’re excited to be putting it out.

What happens after that still has to be confirmed, though we’ve got a backlog of edits from FLX ONE, Jimmy The Twin and ourselves to schedule in. Then there’s the original material we’ve been working on, and those from our artists, and a few surprises. We’ll explain more nearer the time, but one thing you can be sure of is that it won’t be rubbish. Or it’ll be good rubbish, at least. You’ll have to make up your own minds – we’ll do our best to impress.

With so much material coming up, it goes without saying that Saturday should have a real celebratory feel. It’ll be the first time we’ve got a load of our artists together, and the first time either Jimmy The Twin or FLX ONE has played one of our parties. Both are good DJs and top chaps; you’ll love them. Then of course there’s Cosmic Boogie, who has smashed up the dance every time he’s appeared in Bristol. He’ll no doubt do a great job again, joining the dots between good quality house, disco, boogie, deep soul and the like. The night we’ll be topped and tailed by our good selves, mainly showcasing material from the label past, present and future.

Entrance, as ever, is free, so if you’re in Bristol – or somewhere within easy traveling distance – there’s no excuse not to head down, have a few local ciders and dance like a baboon. We’ll also be giving stuff away, and may even get on the mic. Blimey.

As we always say, “there aint no party like a Bedmo party”. You knows it.

On Easter Sunday, Bedmo Disco’s bearded wonder/bearded blunder (delete as appropriate) Sell By Dave (pictured above, wearing a silly hat) hosted a special bank holiday edition of Bedmo Disco Radio on Hivemind.fm. If you missed out first time round, you can now listen again.

With Five-Stylez away getting on the piste (tee hee) in France, Sell By Dave took the opportunity to mix-up a distinctly summery bunch of tunes that included a clutch of forthcoming Bedmo Disco Records releases, slo-mo Balearic gems, needless re-edits, deep house, synthwave, afro grooves, electrofunk and, of course, disco.